The sabertooths were ancient ancestors of today’s big cats(tigers, lions, jaguars, leopards, and snow leopards).They all had long fangs that coudn’t fit in their mouths.They killed their prey with neat and precise killing bites without touching bone because bone could break their fangs.The three main saber toothed-tigers are the Smilodon which lives alone, the Homotherium who hunted in packs, the Megantereon which hunted alone, and the Machairodus which hunted alone. They all hunted big prey and their main enemies are the same ones of the big cats today, the hyenas.So though the sabertooths went extinct a long time ago their DNA still lives with us, in the big cats. 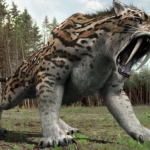