The Lion King is a great movie according to me.It is about a Lion named Mufasa and his cubs Simba and Nala. Mufasa dies because his evil brother Scard pushes him off a mountain but Simba thinks it is his own fault because he doesn’t know what Scard did. Simba runs away but later comes back and kills his evil uncle, Scard. Then he marries Nala and has a cub. 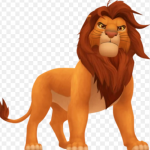